After football, cricket is considered to be the most played and loved sport, this game is easily and easily adopted by people of every class and age, today cricket is not just a game but has become a passion for people. Everyone is fond of cricket, some are fond of playing and some like to watch, for the same kind of cricket lovers, here we will know about interesting facts about cricket. If you are a true and good cricket lover or player then you will enjoy reading these amazing things about cricket. But before that, you should also know how and when cricket started. We will discuss it.

FACT#2. The first One Day International (O.D.I)  match of cricket was played between Australia and England in 1971.

FACT#3. Australia’s batsman Charlie Bannerman was the first batsman in the world to score a century in a Test match. He made the first century of Test cricket in 1877.

FACT#4. The first run of international cricket was made by Australian team batsman Charlie Bannerman.

FACT#5. Sachin Tendulkar is the first player in the world to be given out the first time by the third umpire.

FACT#6. Chris Gayle is the only batsman in the world who has hit the first ball six times in Test cricket. Who was Iftikhar

FACT#7. Saif Ali Khan’s Grandfather Iftikhar Ali Khan Patodi is the only player who has played Test matches from two countries. He has played a Test match from both the teams of India and England.

FACT#10. The interesting fact associated with India’s bowler Ishant Sharma is connected. In the 21st century, the three batsmen who scored the most runs against India, Ishant Sharma out these players in the match. These three batsmen – Alastair Cook (scores 294), Michael Clarke (scores 329), and Brendon McCullum (scores 302)

FACT#12. Sourav Ganguly is the only cricketer to win continuously the Man of the Match award four times in 4 matches.

FACT#14. Chris Martin and S Chandrasekhar are two world-class players who have got more wickets than run in their entire Test career.

FACT#16. Inzamam Ul Haq is the first Pakistani who took a wicket on the first ball of his career.

FACT#17. The Great Australian Player Don Bradman had only 6 sixes in his career.

FACT#18. Pakistan’s star spinner Saeed Ajmal has won many matches in Pakistan but he has not got the man of the match yet.

FACT#22. V.V.S Laxman is the only player who has played more than 100 Test matches but never played a World Cup match.

FACT#23. World Cup started in 1975, and there were 15 matches between eight teams in this World Cup.

FACT#24. The red ball was used before 1992 the World Cup, while after this world cup ball’s color has changed to white.

FACT#25. The West Indies and Australia had refused to play against Sri Lanka in the 1996 World Cup, which led to Sri Lanka making the winners in those two matches without playing the match.

FACT#26. Yuvraj Singh became the ‘Man of the Match‘ in the four consecutive matches of the 2011 World Cup.

FACT#27. The ICC snatched the 2011 World Cup host from Pakistan because of the attack on the Sri Lankan team in 2009.

FACT#28. West Indies was badly lost to Kenya in the 1996 World Cup. This win of Kenya surprised the entire cricket world because before this victory there was no identity of Kenya in the whole world.

FACT#29. Prior to the 1996 World Cup match West Indies between Kenya. A cricketer of Kenya asked for an autograph from Brian Lara, he refused to give him an autograph.

FACT#30. India lost the 1987 and 1999 World Cup matches to Australia by only 1 run and Australia won these world cups.

FACT#31. Herschelle Gibbs had hit six sixes in an over against Holland in the one-day match of the 2007 World Cup.

FACT#32. Sachin Tendulkar has won “Man of the Match” almost 8 times in the World Cup.

FACT#33. Lasith Malinga took consecutive wickets in four balls of the same over in the 2007 World Cup against South Africa.

FACT#35. The 1987 World Cup had to earlier be held in England, but later it happened in India.

FACT#36. Ricky Ponting had played the most 46 matches in the World Cup.

FACT#37. The World Cup debut was incomplete in 1996 when the audience started throwing bottles on the field after seeing India losing a match against Sri Lanka in Kolkata.

FACT#38. South Africa started the decision of the third umpire from the 1992 World Cup.

FACT#39. Sunil Gavaskar had recorded the record of being dismissed for the first ball of three consecutive Tests in his career.

FACT#43. Anil Kumble is the only bowler who has taken 10 wickets in an innings.

FACT#44. Canada team took part in the place of East Africa in the 1979 World Cup.

FACT#45. In the third test match against Australia at the 1995 Brabourne stadium, Abbas Ali Baig had completed his 50 runs when a girl came running to congratulate Abbas Ali from the north stand and kissed Baig, this happened for the first time in cricket. Which even today remains a record and funny facts.

FACT#47. This test match took place between Australia and England, the oldest team of cricket, in which England bowler Jim Laker alone had destroyed Australia! This test match is remembered even today and the biggest record of cricket was made in it. Actually, before this match, the Test series was tied at 1-1 and the England team wanted as much as they wanted in any situation.

FACT#48. No one wants to remember this innings of Sunil Gavaskar, but it cannot be forgotten because he played this innings very slowly. On 7 June 1975, Sunil Gavaskar opened in a match of the World Cup and remained unbeaten. Made only 36 in 174 balls.

FACT#49. West Indies cricket player “Leslie Hylton” is the only cricketer who was hanged for the crime of murder.

FACT#50. Sri Lanka’s Mahela Jayawardene is the only batsman to have scored centuries in both the semi-finals and the final of the World Cup. 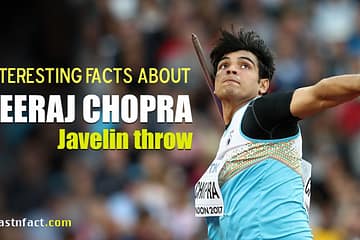 25 Interesting Facts About Mirabai Chanu India’s account has been opened on the very second day of the Tokyo Olympics. The country’s biggest hope Mirabai Chanu has won a silver medal in weightlifting. Chanu won Read more…