The war between Ukraine and Russia has intensified. While the attack from Russia continues continuously, Ukraine has also refused to give up. war. Russia and Ukraine have suffered a lot in this. People are spending their days in the metro station. For the past few days, you have been continuously hearing the name Ukraine. Let’s know interesting facts related to Ukraine.

Ukraine is a beautiful country in Eastern Europe with a total area of 603,550 sq km. The capital of Ukraine is Kyiv, which also has the distinction of being the largest city in this country.

#2. Terms of Population
Ukraine is one of the largest countries in Europe in terms of area. Interestingly, the country has a population of 46 million, which is less than the population of Germany and France. Ukraine comes third in the world in terms of agriculture.

#3. Currency and Language
It is the 46th largest country in the world and the official language of this country is Ukrainian, although many other languages are also spoken in this country.

#4. WhatsApp is a gift from Ukraine
Today a large section of the world is using WhatsApp. You must also be seeing in your circle how WhatsApp is being used. But, do you know that Ukraine is also behind the making of this famous chatting application. Actually, a Ukrainian citizen is also included in the people who have created WhatsApp. Yes, WhatsApp’s co-founder and CEO Jan Kom is from Ukraine and has spent a lot of his life in Ukraine. But, now they are living in America.

#5. Great shots given to many films
Today Ukraine may have been devastated, but Ukraine is known for its beauty. The result of this is that filmmakers from all over the world like to shoot films here. India is also not behind in this and many films of India have also been shot in Ukraine, where the number of films in South Indian cinema is high. One of the reasons for this is that the visa process is very easy here and a visa is not required in many countries. In such a situation, filmmakers get a good location to shoot with less hassle.

#6. Nuclear Weapon
This country is also famous for having the third-largest nuclear weapons in the world. Let us tell you, Europe has the largest army after Russia and it is considered mandatory to be recruited into the army here.

#7. Tunnel of Love
Tunnel of Love is one of the most beloved and favourite places in Ukraine. It is a railway line that starts at Klevan station and runs to the northern part of Orzhiv. This 4.9 km long tunnel is called the tunnel of love, which is surrounded by beautiful forests. This is a very popular place for those who like to roam alone in peace or want to spend some beautiful moments with their partner. 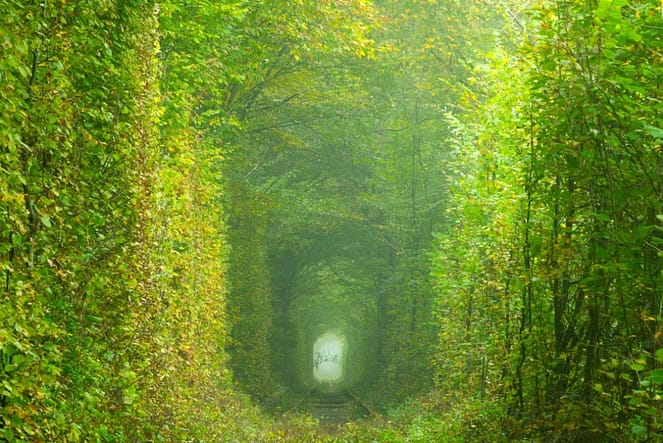 Tunnel of Love in Ukraine

#8. Ukraine Forts
Ukraine is home to about 5000 forts and is a perfect destination for history buffs. The country’s Kamianets-Podilsky palace comes only in those attractive palaces, where the crowd of tourists is seen the most. Apart from this fort, Palanok Castle, Akkerman Fort, and Pidhiratsi Castle surrounded by greenery also come in these beautiful forts.

#9. Deepest Metro Station
Arsenalna Underground Metro Station is located on the Kyiv city metro line, which is 105.5 meters deep. This station is famous for being the deepest metro station in the world. Many stations here are so deep.

#10. Most Beautiful Women
Ukraine is not only very famous for its technical things, but the women here also come among the most beautiful women in the world. Also, from household chores to Parliament, the women here walk shoulder to shoulder with the men.

#13. History of Capital Kyiv
The city of Kyiv is the most populated city in the country of Ukraine and along with this, this city is also a major centre of Ukraine’s economic condition, political situation and culture, this city was established 1600 years ago. The capital of Ukraine, Kyiv is home to more than 2.8 million people and the city is home to the largest population in Ukraine.

#14. Diversification of Population
About 77.8 per cent of the population of Ukraine is native Ukrainians and 22% of the people have come from nearby countries.

#15. Value of Russian Language
Russian is the most spoken language in the eastern and southern cities of Ukraine.

#16. The Highest Point in Ukraine
The highest point in Ukraine is known as Hora Hoverla and is located in the Carpathian Mountains at an altitude of 2,061 meters (6,762 ft).

#17. The Breadbasket Country
As of 2011, Ukraine was the world’s third-largest grain exporter and was also known as the breadbasket country.

#18. Status of Hero City
The city of Kyiv in the Ukraine country has the status of Hero City and this honour was given to this city by the Soviet Union in 1941 as a result of its resistance to the Nazis.

#19. Kyiv War
The Nazi army had surrounded the city of Kyiv in 1941, but the people of Kyiv did not kneel before them and opposed them fiercely, despite this, hundreds of Kyiv people lost their lives in this war and this war was called Kyiv War.

#20. Chornobyl Plant Disaster
In 1986, Ukraine suffered the world’s most devastating nuclear power plant disaster and this tragedy occurred at the Chornobyl plant in the northern part of the country, in which hundreds of people died.

#21. Famous for Dance and their Hospitality
The people of Ukraine are known all over the world for their hospitality, these people respect and respect their guests wholeheartedly. Ukrainians are accustomed to energetic, fast-paced folk dances, which dance in traditional styles.

#23. Horilka
Ukrainians love to drink Horilka, which is a local version of Vodka, often savouring this national drink with chilli dishes.

#24. The Highest Number of Cafes
The city of Lviv in Ukraine is home to the highest number of cafes per capita in the world. For your information, let us tell you that there are more than 1,500 cafes in this city.

#25. Traditional Dishes
The traditional dishes of Ukraine mainly include Borsh and varenyky popular traditional Ukrainian dishes which are eaten by the people of this country with great fervour.

#26. Consumption of Alcohol
According to the WHO, Ukraine is the 6th largest alcohol-consuming country in the world.

#27. World Heavyweight Titles
Apart from football, boxing is also one of the popular sports in Ukraine and Ukrainian brothers Vitali and Wladimir from Ukraine have won several worlds heavyweight titles boxing.

#31. World’s First Largest Airplane
The world’s first largest aeroplane was built in Kyiv, the capital of Ukraine, for your information, let us tell you that the name of this ship was The Antonov An-225 Mriya and its wingspan was 88.4 meters and its weight was 640,000 kg. This ship was built during the Soviet era.

#32. Rarely Seen Smiling in Public
You will be surprised to know that Ukrainians come under the category of people who smile very rarely and native Ukrainians are rarely seen smiling in public.

#34. Sixth Lowest Sex Ratio
Ukraine has only 86.3 men for every 100 women. For example, the number of women in this country is more than that of men, which is the sixth-lowest male-female ratio in the world.

#35. Severe Famine in 1933
Ukraine experienced a severe famine in 1933, resulting in the death of about 4.8 million people, 15% of Ukraine’s population. During the famine in Ukraine, there was so much hunger that the government arrested more than 2,000 Ukrainians for cannibalism.

#36. The Rule of Salary Fee
The Ukrainian government deducts 20 per cent of the salary of the country’s employees as a “salary fee”, which is later given as a pension to retired Ukrainians.